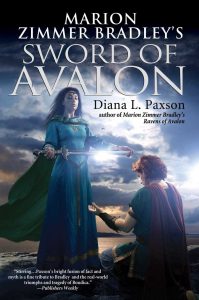 When we think of King Arthur, we picture him with his magical sword, Excalibur. But where did the sword come from? In Mists of Avalon, we are told that its metal came from the stars, but not who made it into a sword. In Sword of Avalon, the story of its first forging is told.

It is the end of the Bronze Age. Changing weather patterns are devastating Northern Europe. It is an age of migrations and destructions, in which men struggle to save what they can. Anderle, the Lady of Avalon, strives to preserve the ancient wisdom, but her visions show her a future in which all will be lost if her cousin’s child Mikantor, the “Son of a Hundred Kings”, is killed. She travels to the stronghold of the Ai-Zir to give warning, and so, when the traitor Galid lets in the warriors of an enemy tribe, she is able to save the boy, but must hide him in the village of the Lake People to keep his enemies from finishing their work.

Mikantor is given the name of Woodpecker, and grows up ignorant of his heritage. When he is taken to Avalon to be trained, he deepens his childhood friendship with Anderle’s daughter Tirilan, and eventually their questions lead to the revelation of his identity and destiny. To keep him safe from Galid, who has made himself warlord of the Ai-Zir, Woodpecker is sent to live with different clans. But Galid’s agents catch up with him in Belerion, and sell him to traders from Tartessos, telling everyone that the boy was drowned. Anderle has a vision in which he returns with a Sword from the Stars, but is close to despair.

Meanwhile, Woodpecker has been taken to the Mediterranean, where he ends up in the citadel of Tiryns in Hellas as the slave of Prince Velantos, a bastard son of the king who is an accomplished bronze-smith. But the court is troubled by rumors of an invasion of barbarians from the north who fight with a new style of sword. Velantos learns to forge the new, leaf-shaped blades, but he cannot make enough to change the outcome when the invaders arrive. Tiryns falls, and Woodpecker, who has come to care for his master, persuades the conquerors to spare him for the sake of his craft. Both are sent to slavery in Korinth, and then, beyond the Alps, ending up at last in the City of Circles on the North Sea. Here, Woodpecker is trained as a warrior, but neither his strength nor Velantos’ skill in building can save the city from the rising sea. When the waters rush in they escape on a ship which carries them back to Britain.

Woodpecker, realizing that he can no longer avoid his destiny, reclaims his true name, Mikantor, and heads for Avalon, hailed by the common people, who have all heard the story of the lost prince who will bring order to the land, wielding a sword from the stars. Tirilan, believing him dead, has taken vows as a priestess, and must hide her love for him. Anderle, recognizing in Velantos the smith she has seen in her visions, suppresses her own attraction to him, as Mikantor gathers a war-band and Velantos beats out weapons to arm them. When Galid threatens to attack Avalon, Mikantor and his men flee to the wilderness. Anderle arranges for Tirilan to act as priestess in the ritual of the Running of the Deer, in which Mikantor kills the King Stag and is hailed by the elder race as King. When they take him to a place of refuge on the moors, Tirilan goes with him and becomes his lady.

With spring, Mikantor feels strong enough to challenge Galid, but in the battle, his sword breaks, and he must flee. Velantos, devastated by the realization that the best bronze blade he could make is not good enough, is ecstatic to receive a lump of meteor iron that the elder folk have treasured as sacred, until he realizes that he does not know how to forge iron. His first attempts are disastrous, and the tension between him and Anderle drives him from Avalon to make a new forge at the ancient tomb on the Ridgeway. As Mikantor and Tirilan journey to make new alliances among the tribes, Velantos struggles with his pride, and finally sends word to Anderle to come and help him seek inspiration from the gods.

At the midsummer gathering of the tribes, Mikantor receives the dragon tattooes, but to gain full support from the warriors, he needs the Sword. As he travels north to recruit more men, and Tirilan goes to be trained as priestess of the land by the queen of the Ai-Zir, Anderle goes to Velantos, and channels the goddess of the forge. In three days of mastery and magic, the Sword is forged, and Velantos and Anderle are united at last. But Galid has captured Tirilan. Anderle goes in disguise to seek her, and Velantos follows.

Now, all paths converge. Mikantor hurries back from the north with an army, Anderle finds and rescues her daughter and takes refuge within the circle of Stonehenge, and Velantos, seeking them, is overtaken by Galid, who captures both him and the Sword. Shamed into fighting, Galid buries the sword in Velantos’ body, and Anderle lets down the magical barrier to bring him into the safety of Stonehenge. Mikantor arrives as Galid flees back to his men, and entering the Henge, receives the Sword from Velantos. As Anderle watches beside the dying smith, Tirilan soars in spirit over Mikantor’s army as he bears the Sword to victory.

In The Mists of Avalon, Marion was dealing with a legend that transcends history. But with The Forest House, the saga entered the world of known events, and became subject to the constraints of the historical record. The task of interweaving Marion’s traditions of Atlantis and Avalon with what archaeology and history tell us about the ancient world has been one of the challenges of continuing the story of Avalon. This is nowhere more true than in the story of the forging of Excalibur.

In Mists, Marion provided a brief, evocative account of its origins:

Fallen to earth in a falling star, a clap of thunder, a great burst of light; dragged still smoking to be forged by the little dark smiths who dwelled on the chalk before the ring stones were raised; powerful, a weapon for a king, broken and reforged this time into the long leaf-shaped blade, tooled and annealed in blood and fire, hardened…a sword three times forged, never ripped out of the earth’s womb, and thus twice holy….

Clearly, the first forging of Excalibur occurred when a meteor fell from the heavens, probably sometime in the Neolithic Age. Unfortunately, no one who lived on the chalk before the megalithic period knew how to forge bronze, much less meteor iron. The only possibility I could think of was that they had tried to hammer it into rough shape with stones. If the second forging produced a leaf-shaped blade, it could only have happened around 1200 BCE, near the end of the Bronze Age, when that style of blade appeared. This was a fascinating period, right in the middle of the long gap between Ancestors and Ravens of Avalon, and seemed to me to be an ideal time to set the story of how the lump of iron became a recognizable sword.

By this time, much of the culture brought by the refugeees from Atlantis in Ancestors would have mutated and blurred through time and assimilation with the native culture if the isle. But although there were proto-Celts living in what is now Germany, the arrival of the first identifiably Celtic peoples in Britain was still around four centuries away. In the Mediterranean, the grandchildren of the heroes of the Iliad still ruled, and in the north, a surprisingly sophisticated Bronze Age culture produced objects of use and beauty. The priesthood on Avalon was part of this cultural complex, with some elements that would remain all the way to the time of Arthur, while others were lost along the way.

At about the time I finished the first part of the story, with its disturbing hints of Climate Change (although the first millenium BCE was a time of global cooling rather than warming), I had a chance to visit Greece with my husband. We spent about a week in the western Peloponnese, that area south of Athens that is not quite an island, famed as the setting for the Greek parts of the Homeric epics, wandering around places with legendary names such as Mycenae and Tiryns. The ruins, built of stones called Cyclopean because they appear too huge to have been moved by mortal men, are still impressive, and inspired me to start writing about Velantos. It was only after the red-headed slave boy had appeared in the story that I realized who he must be.

When I got home, I hit the books and the Internet to fill in the gaps in the background, and especially the art and craft of forging both bronze and iron. I was fortunate to have the help of a number of enthusiasts, including Scott Thomas, the resident blacksmith at the Ardenwood Forge at the Ardenwood Historic Farm in Fremont, California, to figure out what mistakes a bronzesmith would make when attempting to work with iron. The problem was not with the technology, since the same tools could be used for both, but with the knowledge of how to use them. Therein lies the magic.

By the time of King Arthur, horsemen were using long, straight blades like the roman spatha. Logically, the Excalibur featured in Mists must be the product of the third forging. When and how that could have happened is still a mystery, but perhaps there will be another book about the Sword if the story is revealed to me.